Thomas B. Gibbons takes a look at the Conventional Rankine Cycle’s application in the cement sector

>The first major waste heat recovery (WHR) system in a cement plant was the 15 MW unit installed by Kawasaki Heavy Industries for Taiheiyo Cement in 1982. This was a conventional Rankine Cycle using heat from both the kiln and the clinker cooler. As the benefits became generally recognised within the industry, WHR units, the vast majority of which involved the conventional Rankine Cycle, were installed to provide up to about 30% of the power requirements of the plant. The main sources of waste heat were the exhaust from both the preheater and the clinker cooler and, in some of the developing countries where power outages are not unusual, the WHR system may be the only source of reliable power available to the plant operator.

Improvement in the overall efficiency of cement manufacture has resulted in lower exhaust gas temperatures and this development has provided opportunities for alternative technologies, notably the Organic Rankine Cycle (ORC) and the Kalina Cycle, which are more effective in recovering waste heat from lower temperature gases.< 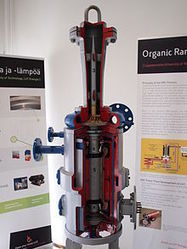 We have all seen the Rankine Cycle engine, most typically as the inefficient steam locomotive.  The modern efficient designs use turbines to convert heat energy from two reservoirs of different temperatures to mechanical energy.

The Organic Rankine Cycle engine uses a fluid – vapor phase change other than water/steam and a wide range of compounds are available including proprietory mixtures.  These mixtures allow for the conversion to mechanical energy in a wide range of applications and temperatures.  Two such applications would be waste heat to energy and geothermal energy systems.

The Green Energy Act stripped Ontarians of their right to appeal decisions on locating energy facilities.

>Former premier Dalton McGuinty told a legislative committee this week that “there was a faulty selection process for gas plant sites and they were wrongly located and had to be shut down.”

But that faulty process was the result of his much-ballyhooed Green Energy Act. And the cost of the faulty process and the subsequent shutdown of the Oakville and Mississauga sites will be $585 million or more.

The result is that Ontario electricity rates, at one time among the lowest in North America, are now some of the highest. Ontario residential customers are paying about three times more for electricity than they did when McGuinty took office. Ontario industry, which used to benefit from low electricity costs, is suffering.<

>Project one involves the National Grid, Costain and Highview, for a proposed utility-scale demonstration project of a fully integrated liquid air energy storage plant of up to 6MW output, hosted by National Grid’s Grain Liquefied Natural Gas (LNG) site at the Isle of Grain in Kent.

The plant would have around five hours of operation (30MWhs), making it the largest demonstration of new energy storage technology in the UK.<

The central concept of gasification is that by raising carbon–rich materials to high temperatures in an oxygen–deficient containment, the material will break down thermochemically instead of burning. If the same material is combusted (burned), it emits carbon monoxide and a host of pollutants, besides being incompletely consumed. If gasified, the products are hydrogen (H2), carbon monoxide (CO) and carbon dioxide (CO2). This is synthetic gas, simply called “syngas.” It can be burned, captured, stored, or its molecules rearranged to form fuels and chemical feedstocks.

The process is moderately more efficient than incineration, has significantly fewer emissions and waste, and the syngas can be shaped into a myriad of products for power production, chemical industries, liquid fuels, and heat.

A gasifier is the central component of a gasification plant. Surrounding it are the feedstock conditioning and delivery systems, oxygen, steam and air input systems, waste removal components, syngas cooling and cleaning systems, power plants, heat recovery units, Fischer–Tropsch molecule rearrangers, and so on. This report focuses on the markets for gasifier units that are in place and will be installed by application segment and geographic location through the year 2017.

What technological breakthrough is most likely in the next 10 years that could completely change the energy equation as we now see it?

Predicting new-energy technological breakthroughs tends to be a fool’s errand. A decade ago, few envisioned the breakthrough that has most rocked the U.S. energy world: the one-two punch of fracking and horizontal drilling that has unlocked huge stores of shale gas from California to New York.

Study after study has pegged energy efficiency as the lowest-cost way to curb fossil-fuel consumption and the resulting greenhouse-gas emissions. The problem has been figuring out how to unlock those efficiency improvements in the real world. Today, creative minds are at work developing electronic systems to track and display the energy use of institutional and individual consumers in ways that could make those users much more conscious both about how much energy they consume and about precisely what they could do to cost-effectively consume less. More information, in short, could equal less power.

Town officials believe an anaerobic digester and combined heat and power facility would eliminate the costs associated with shipping the wet solids, as well as the cost to heat and provide electricity to the transfer station.

This is not just a matter of saving money, though,” said Collins. “It is also a social justice issue. A lot of these plants, like the ones we transport to, are closing down. We really need to be dealing with our own sludge, not sending it off into other communities.”

[…]  anaerobic digestion is a natural process where sludge (plant and animal waste) is broken down by micro organisms, which release the methane, or biogas, that can be used to generate heat and electricity.

“This helps cut fossil fuel use and reduce greenhouse gas emissions,”[…] “The remaining material is rich in nutrients and can be used as fertilizer.”

Whitecourt project is a first for the Calgary-based pipeline company

The Whitecourt Recovered Energy Project captures exhaust heat from Alliance’s compressor stations northwest of Edmonton. The heat is transferred into a closed loop system and powers one of three 40,000-horsepower gas turbines at the site. The power system creates 14 megawatts of baseload electricity. It is expected to be tied into the provincial power grid in May 2013.

According to the company its system has been proven through a long-term five year installation at a San Jose, California landfill, where waste heat captured from the generator’s engine exhaust and cooling systems is used to generate electricity which is then sold to the grid.

“This acquisition once completed will allow GDT Tek to install our Phoenix units at the landfill location and increase revenue by up to 20%,” explained Bo Linton, President of GDT Tek.