USEER examines four sectors of the economy — electric power generation and fuels; transmission, wholesale distribution, and storage; energy efficiency; and motor vehicles — which cumulatively account for almost all of the United States’ energy production and distribution system and roughly 70 percent of U.S. energy consumption. By looking at such a wide portion of the energy economy, USEER can provide the public and policy makers with a clearer picture of how changes in energy technology, systems, and usage are affecting the economy and creating or displacing jobs.

Some key findings of the report include:

3.64 million Americans work in traditional energy industries, including production, transmission, distribution, and storage.
Of these, 600,000 employees contribute to the production of low-carbon electricity, including renewable energy, nuclear energy and low emission natural gas.
An additional 1.9 million Americans are employed, in whole or in part, in energy efficiency.
Roughly 30 percent of the 6.8 million employees in the U.S. construction industry work on energy or building energy efficiency projects.

A copy of the full report is available HERE.

The report also found several energy industries with projected increases in new jobs. Responding to the USEER survey of employers, the energy efficiency sector predicted hiring rates of 14 percent in 2016, or almost 260,000 new hires. Projected hiring rates were at 5 percent within the electric power generation and fuels sector, reflecting overall growth despite a loss of employment in 2015 in the oil and natural gas extraction sectors. Transmission, wholesale distribution, and storage firms anticipate 4 percent employment growth in 2016. Solar energy firms predicted 15 percent job growth over the next year.

Yet even as the report found the opportunity for job growth in many energy sectors, over 70 percent of all employers surveyed found it “difficult or very difficult” to hire new employees with needed skills.

“The transformation of our energy system and the growth of energy efficiency technologies are creating opportunities for thousands of new jobs, especially in energy efficiency and solar,” said David Foster, Senior Advisor on Energy and Industrial Policy at the Department of Energy.  “This report gives an important snapshot of energy employment in America, and subsequent reports will provide better information to guide policies and priorities that create new jobs, appropriately train workers, and promote a successful national energy policy.” …” (1)

“…As a rule of thumb, investment in renewable energy and energy efficiency generate about 3 times the amount of jobs that other energy related investments create (gas, oil, coal, nuclear). Average numbers of jobs created per million euro invested (3CSEP): 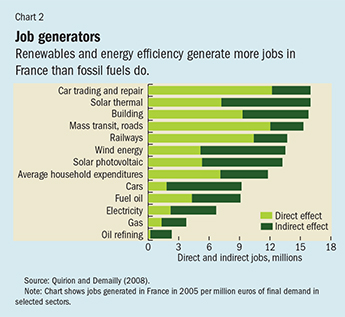 “[…] While much of the debate on climate change and employment has focused on renewables, another and more significant source of jobs from decarbonization has received much less attention. Substantial efficiency gains are technically feasible and economically viable in industry, housing, transportation, and services. Businesses can make a profit and households can enjoy real savings. And spending the surplus on things other than fossil energy will boost an economy’s employment.

For example, the United States is a diversified economy that imports substantial amounts of equipment for renewables. A recent study carefully considered economy-wide effects of reducing emissions by 40 percent by 2030 through a mix of clean energy and energy efficiency (Pollin and others, 2014). It concluded that $200 billion a year in investment would generate a net gain of about 2.7 million jobs: 4.2 million in environmental goods and service sectors and their supply chains but 1.5 million lost in the shrinking fossil- and energy-intensive sectors. The net gain of 2.7 million jobs would reduce the unemployment rate in the 2030 U.S. labor market by about 1.5 percentage points—for example, from 6.5 percent to 5 percent. The authors consider this a conservative estimate; for example, it does not take into account the 1.2 to 1.8 million jobs likely gained from reinvested savings.

Other studies show similar results. A review of 30 studies covering 15 countries and the European Union as a whole found appreciable actual or potential net gains in employment (Poschen, 2015). Most studies considering emission targets in line with the ambitions announced for a Paris agreement in December find net gains on the order of 0.5 to 2.0 percent of total employment, or 15 million to 60 million additional jobs. In emerging market economies such as Brazil, China, Mauritius, and South Africa, green investment was found to accelerate economic growth and employment generation when compared with business as usual. Several studies suggest that more ambitious climate targets would generate greater gains in employment (for a discussion of particular countries, see Poschen, 2015). […]” (3) 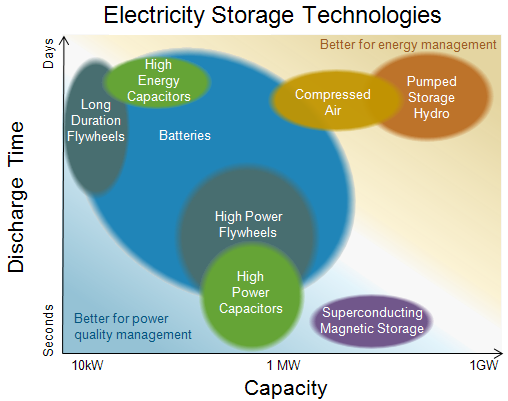 “It doesn’t always rain when you need water, so we have reservoirs – but we don’t have the same system for electricity,” says Jill Cainey, director of the UK’s Electricity Storage Network.

[…] Big batteries, whose costs are plunging, are leading the way. But a host of other technologies, from existing schemes like splitting water to create hydrogen,compressing air in underground caverns, flywheels and heated gravel pits, to longer term bets like supercapacitors and superconducting magnets, are also jostling for position.

In the UK, the first plant to store electricity by squashing air into a liquid is due to open in March, while the first steps have been taken towards a virtual power station comprised of a network of home batteries.

“We think this will be a breakthrough year,” says John Prendergast at RES, a UK company that has 80MW of lithium-ion battery storage operational across the world and six times more in development, including its first UK project at a solar park near Glastonbury. “All this only works if it reduces costs for consumers and we think it does,” he says.

Energy storage is important for renewable energy not because green power is unpredictable – the sun, wind and tides are far more predictable than the surge that follows the end of a Wimbledon tennis final or the emergency shutdown of a gas-fired power plant. Storage is important because renewable energy is intermittent: strong winds in the early hours do not coincide with the peak demand of evenings. Storage allows electricity to be time-shifted to when it is needed, maximising the benefits of windfarms and solar arrays. (2)

“GE has announced it is working on a way to use CO2 pollution to make new types of solar batteries that could each power up to 100,000 homes. CO2 is the main contributor to climate change, and is released into the atmosphere when coal is processed at power plants. Currently environmental procedures mean that some CO2 from these plants is captured and stored, so it’s not released back into the atmosphere. But the question has always been: What do you do with the stored gas?” (1) 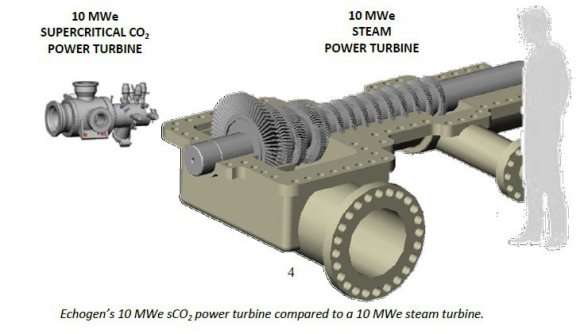 What are the Benefits of Supercritical CO2?  With the transition from steam generation to using Supercritical CO2 as a working fluid, we seen large gains in energy efficiency conversion, coupled with significant size (footprint) reduction of turbomachines.  Other benefits include sequestering CO2 from the environment and reducing GHG emissions.   Also, this system can be utilized to capture energy from other heat sources including waste heat streams and co-generation applications. 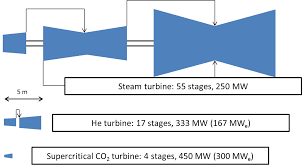 What is Supercritical CO2?  “[…] Supercritical CO2 is a fluid state of carbon dioxide where it is held above its critical pressure and critical temperature which causes the gas to go beyond liquid or gas into a phase where it acts as both simultaneously. Many fluids can achieve supercritical states and supercritical steam has been used in power generation for decades. Supercritical CO2 has many unique properties that allow it to dissolve materials like a liquid but also flow like a gas. sCO2 is non-toxic and non-flammable and is used as an environmentally-friendly solvent for decaffeinating coffee and dry-cleaning clothes. 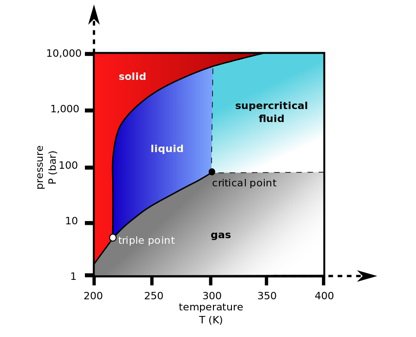 The use of sCO2 in power turbines has been an active area of research for a number of years, and now multiple companies are bringing early stage commercial products to market. The attraction to using sCO2 in turbines is based on its favorable thermal stability compared to steam which allows for much higher power outputs in a much smaller package than comparable steam cycles. CO2 reaches its supercritical state at moderate conditions and has excellent fluid density and stability while being less corrosive than steam.  The challenges in using sCO2 are tied to identifying the best materials that can handle the elevated temperatures and pressures, manufacturing turbo machinery, valves, seals, and of course, costs. […] ”  (2)

How will this work?

“[…] The design has two main parts. The first one collects heat energy from the sun and stores it in a liquid of molten salt. “This is the hot side of the solution,” Sanborn says. The other component uses surplus electricity from the grid to cool a pool of liquid CO2 so that it becomes dry ice.

During power generation, the salt releases the heat to expand the cold CO2 into a supercritical fluid, a state of matter where it no longer has specific liquid and gas phases. It allows engineers to make the system more efficient.

The supercritical fluid will flow into an innovative CO2 turbine called the sunrotor, which is based on a GE steam turbine design. Although the turbine can fit on an office shelf (see image above) it can generate as much as 100 megawatts of “fast electricity” per installed unit—enough to power 100,000 U.S. homes.

Sanborn believes that a large-scale deployment of the design would be able to store “significant amounts” of power —— and deliver it back to the grid when needed. “We’re not talking about three car batteries here,” he says. “The result is a high-efficiency, high-performance renewable energy system that will reduce the use of fossil fuels for power generation.”

He says the system could be easily connected to a solar power system or a typical gas turbine. The tanks and generators could fit on trailers. His goal is to bring the cost to $100 per megawatt-hour, way down from the $250 it costs to produce the same amount in a gas-fired power plant. “It is so cheap because you are not making the energy, you are taking the energy from the sun or the turbine exhaust, storing it and transferring it,” says Sanborn.

The process is also highly efficient, Sanborn says, yielding as much as 68 percent of the stored energy back to the grid. The most efficient gas power plants yield 61 percent. The team is now building a conceptual design, which Sanborn believes could take five to 10 years to get from concept to market. […]” (5) 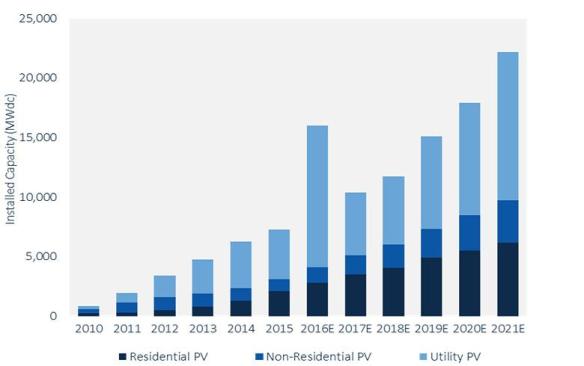 “[…] The market will be driven by the utility-scale segment, which will account for 74% of annual installations following a rush to take advantage of the federal Investment Tax Credit (ITC) that was initially set to expire at the end of this year. The residential and commercial markets are also expected to see strong growth in 2016, though.

With the ITC now extended, state-level drivers and risks will move to the forefront in 2016, says the US Solar Market Insight Report 2015, published in conjunction with the Solar Energy Industries Association (SEIA).

In 2017, the US solar market is expected to shrink to 10 GW due to the pull-in of utility demand in 2016. “But between 2018 and 2020, the extension of the ITC will reboot market growth for utility PV and support continued growth in distributed solar as a growing number of states reach grid parity,” said GTM Research senior analyst Cory Honeyman. […]”
Source Link:  http://bit.ly/1LdMdRB