Previously, I reported on Cryptocurrency Market Capitalization and its relevance to understanding movements in the prices of cryptocurrencies. Let’s take a look at the markets one week after the reported $25bn of capital was put into the crypto markets. Refer to Figures 1 and 2 below, where in Fig. 2 we see that the TMC moved from $275 bn to $300 bn in under one hour. 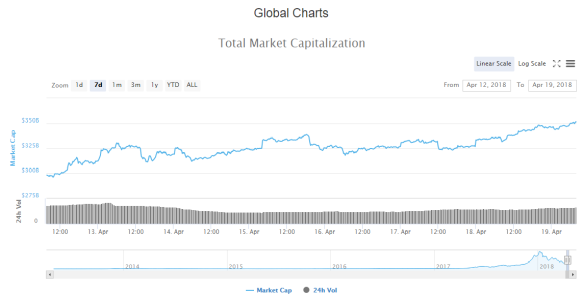 Inspection of Figure 1. indicates that the TMC demonstrates a weekly upward trend. After the initial spike of $25 bn reported last Thursday, another $25 bn was added to the TMC Friday. For most of the week it hovered at the $325 bn level until Wednesday April 18th. Since then another $25 bn has been added over 24 hours to a new level of $350 billion. This is a total increase in the TMC of the Cryptocurrency market in one week of $75 billiion, or 27.2 %, from $275 to $350 billion. 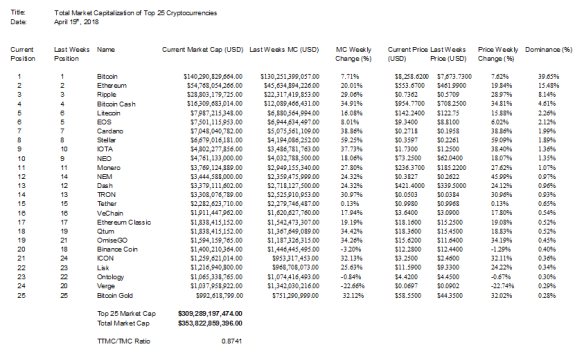 Of the listed 1574 cryptocurrencies traded on over 10,000 markets as reported by the website CoinMarketCap we see that Bitcoin represents over 39% of the TMC, and the top 25 altogether account for over 87% of capital in the market.

Of the 25 listed coins/tokens inspected we see that 22 advanced and only 3 retracted on the week, for 88% of the listed cryptocurrencies in the green. Most of these advanced by 25 to 35% over the week, with Stellar advancing the most at 59%. This is an example of a competitive marketplace where various suppliers are in competition for market share.

Note that the TMC increased from $275 to $350 Billion USD or 27%, and by inspection we can see that the average price of the cryptocurrencies listed in the top 25 increased by a rate between 25 to 35%. At present the TMC of $350 bn is 42% of the peak TMC of $829 bn  which occurred earlier this year on January 7, 2018. Since the peak the TMC has been generally trending down to current levels.

We can see from the forgoing that there is a strong correlation between TMC and the price movements of the various cryptocurrencies. This is the market dynamic of supply and demand in action; as the money supply increases in a market of fixed supply such as cryptocurrency, the prices of said commodities in that market must rise.

Is it possible that we have seen the bottom range of current TMC and moving forward we may experience more uptrends.