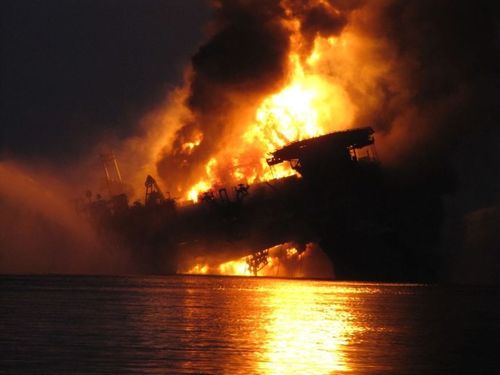 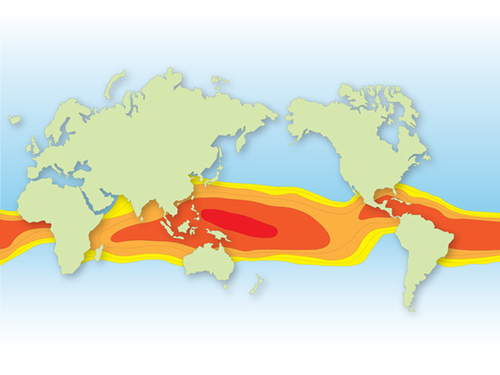 A 10-megawatt ocean thermal energy conversion plant is under way

>[…] the company has been working on OTEC since the 1970s, and the technology hasn’t changed drastically since then. OTEC systems make use of the temperature differential in tropical areas between warm surface water and cold deep water. In most systems, ammonia, which has a very low boiling point, passes through a heat exchanger containing the warm water. The ammonia is vaporized and used to turn a turbine, and then it’s cycled past the cold water to recondense. This is a renewable energy technology with the rare capacity to supply base-load power, as water temperatures are fairly stable.

The ammonia passes through a closed loop, while the water comes and goes through massive pipes. The project in China may pump cold water up from a depth of about 1000 meters, using a pipe that’s 4 meters across. Varley says that some of the infrastructure can be borrowed from the offshore drilling industry: “We showed them our requirements for the platform, and they yawned and said, ‘Is that all you got?’ ” he says. “But then we showed them the pipe.” Attaching the massive pipe to a relatively small floating platform creates unusual stresses, Varley says. Lockheed also had to find materials for the pipes and the heat exchangers that could withstand the harsh marine environment.< 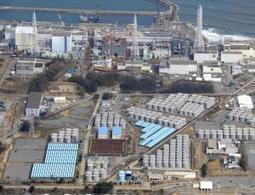 >Last month the plant’s owner, Tepco, finally admitted what many had suspected – that the plant was leaking. Now Japan’s Nuclear Regulatory Authority is calling the situation an emergency, and says Tepco’s plans to stop the leak are unlikely to work.

The problem is that groundwater is entering the damaged reactor buildings, picking up radioactive elements like caesium and seeping out to sea. Tepco has spent months pumping the water to the surface and storing it in tanks, and sinking wells to lower the water table.

[…] Given that Tepco is unlikely to stem the leaks from Fukushima any time soon, the fishing ban could continue for a long time. “People ask when will it be safe, and we can’t answer that,” says Buesseler. “The only thing you can do is stop the source, and that’s a huge engineering challenge.”<

>The provisional winner of today’s lease sale, which auctioned two leases for a Wind Energy Area of 164,750 acres offshore Rhode Island and Massachusetts for wind energy development, is Deepwater Wind New England, LLC. When built, these areas could generate enough combined energy to power more than one million homes.

“When you think about the enormous energy potential that Atlantic wind holds, this is a major milestone for our nation,” said Secretary Jewell. “A lot of collaboration and thoughtful planning went into getting to this point, and we’ll continue to employ that approach as we move forward up and down the coast to ensure that offshore wind energy is realized in the right way and in the right places. Offshore wind is an exciting new frontier that will help keep America competitive, and expand domestic energy production, all without increasing carbon pollution.”

The Wind Energy Area is located 9.2 nautical miles south of the Rhode Island coastline and has the potential to support 3,395 megawatts of wind generation. BOEM will hold its next competitive lease sale for offshore wind on Sept. 4, which will auction nearly 112,800 acres offshore Virginia, and is expected to announce additional auctions for Wind Energy Areas offshore Massachusetts, Maryland, and New Jersey later this year and in 2014.

Maps for these areas are available on BOEM’s website.<