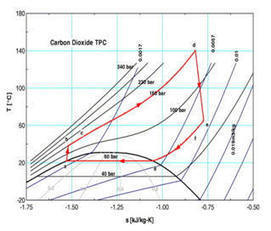 >Chen et al. [1-3] did a comparative study of the carbon dioxide supercritical power cycle and compared it with an organic Rankine cycle using R123 as the working fluid in a waste heat recovery application. It shows that a CO2 supercritical power cycle has higher system efficiency than an ORC when taking into account the behavior of the heat transfer between the heat source and the working fluid. The CO2 cycle shows no pinch limitation in the heat exchanger. Zhang et al.  [4-11] has also conducted research on the supercritical CO2 power cycle. Experiments revealed that the CO2 can be heated up to 187℃ and the power generation efficiency was 8.78% to 9.45% [7] and the COP for the overall outputs from the cycle was 0.548 and 0.406, respectively, on a typical summer and winter day in Japan [5].

There is no supercritical Rankine cycle in operation up to now. However, it is becoming a new direction due to its advantages in thermal efficiency and simplicity in configuration.<