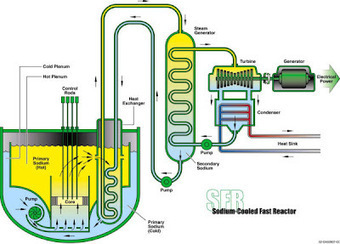 >Because of its physical properties as a liquid, it has become a target fluid of opportunity to run turbines and thus make electricity. Steven Wright, Ph.D., who recently retired from Sandia National Laboratory (SNL), has set up a consulting company called Critical Energy LLC to bring this technology to a commercial level.

The objective of using supercritical CO2 (S-CO2) in a Brayton-Cycle turbine is to make it much more efficient in the transfer of heat. Wright points out that a steam turbine is about 33% efficient, but that an S-CO2 turbine could be as high as 48% efficient, a significant increase.

A closed loop supercritical CO2 system has the density of a liquid, but many of the properties of a gas. A turbine running on it, “is basically a jet engine running on a hot liquid,” says Wright.

“There is a tremendous amount of scientific and industrial interest in S-CO2 for power generation. All heat sources are involved…<