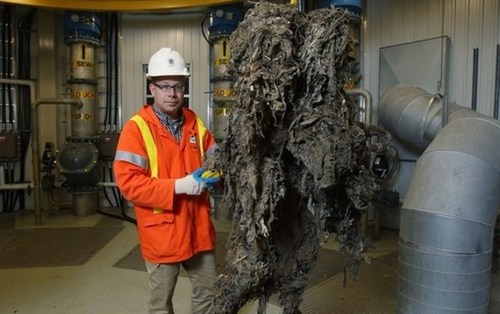 They’re billed as a fresh, clean alternative to toilet paper – but waste-water utilities across Canada say personal wipes are creating putrid sewage clogs that are costing Canadian ratepayers at least $250 million a year.

>MESUG members have set up traps across Ontario municipalities, Orr said, and they’re catching hundreds of flushable wipes. The situation is the same across the country, with officials in Penticton, B.C., recently complaining publicly about the wipes.

Canadian utilities aren’t alone in their battle against personal wipes.

In the U.S. capital region, the Washington Suburban Sanitary Commission has spent more than $1 million installing powerful grinders to shred wipes before they reach pumps on their way to treatment plants.

The utility has also devoted hundreds of man-hours to unclog pipes and repair broken sewer lines. It blames wipes for blockages that have caused sewage to overflow into streams or back up into residential basements.<

This investment is helping smart grids to become the norm across the country. A side benefit is that utilities are also developing their smart grids for telecoms over and above that used by meters to send data to network controllers.

A hindrance to cities aiming to develop comprehensive WiFi networks has come from the powerful telecoms industry, which employs its lobbying clout to push for laws blocking or preventing municipalities from offering WiFi or fixed broadband services.

Michael Miller of San José’s Fairmont Hotel says, “The two-container, wet/dry system was quite easy to implement, and we are pleased by how committed and supportive our staff is of this most important initiative. As a result, we are realizing cost savings and proudly increasing the amount we recycle.”

According to San José Councilman Sam Liccardo, the city is on track to achieve an 80 percent waste diversion rate by 2014. “That’s good news for everyone because this helps extend the life of our landfills and reduces associated taxpayer costs, which can be significant,” he says.

“And, with a single, streamlined collection service,” Liccardo adds, “we have reduced the number of garbage trucks driving through busy business districts. These are among the steps that help move San José towards a sustainable future.”

There could be big bucks in waste disposal and management, Bank of America/Merrill Lynch figures.

Lets look at some of the opportunities BofA/ML has identified:

– Disposal and recycling of municipal solid waste (rubbish, in common parlance) is currently worth $400 billion but over the next decade,  $87 billion in investments are expected in this sector.

Wastewater and sewage treatment:  The biggest investments are needed in the developing world but in the United States alone, infrastructure of $1 trillion could be needed over the next 25 years, BofA says, citing research from the American Waterworks Association.