Does it make a difference if our models of energy and the economy are overly simple? I would argue that it depends on what we plan to use the models for. If all we want to do is determine approximately how many years in the future energy supplies will turn down, then a simple model is perfectly sufficient. But if we want to determine how we might change the current economy to make it hold up better against the forces it is facing, we need a more complex model that explains the economy’s real problems as we reach limits.We need a model that tells the correct shape of the curve, as well as the approximate timing. I suggest reading my recent post regarding complexity and its effects as background for this post.

The common lay interpretation of simple models is that running out of energy supplies can be expected to be our overwhelming problem in the future. A more complete model suggests that our problems as we approach limits are likely to be quite different: growing wealth disparity, inability to maintain complex infrastructure, and growing debt problems.Energy supplies that look easy to extract will not, in fact, be available because prices will not rise high enough. These problems can be expected to change the shape of the curve of future energy consumption to one with a fairly fast decline, such as the Seneca Cliff.

Key contributing factors in the fall in oil prices range from surprise production levels in Libya to, in-fighting between OPEC members and EU economic outlook…

1. The U.S. Oil Boom
America’s oil boom is well documented. Shale oil production has grown by roughly 4 million barrels per day (mbpd) since 2008. Imports from OPEC have been cut in half and for the first time in 30 years, the U.S. has stopped importing crude from Nigeria.

2. Libya is Back
Because of internal strife, analysts have until recently assumed that Libya’s output would hover around 150,000-250,000 thousand barrels per day. It turns out that Libya has sorted out their disruptions much quicker than anticipated, producing 810,000 barrels per day in September. […]

3. OPEC Infighting
There have been numerous reports about the discord between OPEC members, leading many to believe that OPEC will not be able to reign in production like it has done so in the past. The Saudis and Kuwaitis have reportedly been in an oil price war, repeatedly lowering their prices in order to maintain their market share in Asia. […]

4. Negative European Economic Outlook
European Central Bank president Mario Draghi has left investors concerned about the continent’s slow growth. Germany’s exports were down 5.8 percent in August, stoking the fears of anxious investors that the EU’s largest economy had double dipped into recession last quarter. Across the Eurozone, the IMF again lowered its growth forecast to 0.8 percent in 2014 and 1.3 percent in 2015.

Following months of protests, and most recently a court injunction to remove protesters on Burnaby Mountain that resulted in numerous arrests, Kinder Morgan is holding a telephone town hall tonight.

>” […] Asked if he was surprised by the protest and the numbers who showed up and Anderson said, no. Instead what was shocking was what he called people’s “willingness to disobey the injunction and put themselves up for arrest.“

[…] Also the diversity of the crowd, which included according to Anderson, “hardcore protesters, local interest groups and residents in the community,” that made it difficult for Kinder Morgan to have a conversation and plan appropriate action.

“We tried to remain calm and not be heavy-handed,” Anderson said.

But five protestors, who were arrested and are being sued for $5 million, may see it differently.

Anderson called the lawsuit an “unfortunate part of the process” but says it was necessary to get the work done safely. […]

The survey work may be done but for the City of Burnaby’s Mayor Derek Corrigan, there’s still a matter of the bill for the Burnaby Mountain policing costs.

“I want [Kinder Morgan] to pay,” Corrigan said in an earlier interview.

“We told them not to go on to the mountain, we told them to obey our bylaws, we were overruled by the National Energy Board, so they can’t possibly say in any way this was our fault or responsibility.”

But for Anderson, the police officers were necessary to enforce the legal injunction for “legally authorized work.”

“I think Kinder Morgan’s playing the poor me with regards to their activities,” he said.

“I find it quite surprising; I don’t know many people that are going to feel sorry for a multinational corporation that’s exerting its influence on a local government.” […]”

The report concludes that the job estimates put forward by TransCanada are unsubstantiated and the project will not only create fewer jobs than industry states, but that the project could actually kill more jobs than it creates.

The project budget that has a direct impact on U.S. employment is between $3 and $4 billion or about half of what industry claims.50% or more of the steel pipe, the main material input used for Keystone XL, will be manufactured outside of the U.S.Jobs will be temporary and between 85-90% of the people hired to do the work will be non-local or from out of state.The Perryman study, which estimates around 119,000 (direct, indirect and induced) jobs is a poorly documented study commissioned by TransCanada.Job losses would be caused by additional fuel costs in the Midwest, pipeline spills, pollution and the rising costs of climate change.  Even one year of fuel price increases as a result of Keystone XL could cancel out some or all of the jobs created by the project.”<

The proposed Energy East pipeline won’t be the boon to Eastern Canadian refineries that supporters claim because the vast majority of the oil in it would be bound for export markets, environmental groups argue in a report being released Tuesday.

Refinery capacity already in use

The report Tuesday said the three refineries along the Energy East route — Suncor Energy’s in Montreal, Valero’s near Quebec City and Irving’s in Saint John, N.B. — have a combined capacity of 672,000 barrels per day.

Of that, the groups figure 550,000 barrels per day can come from elsewhere — offshore crude in Atlantic Canada, booming U.S. shale resources and, eventually, via Enbridge Inc.’s recently approved reversed Line 9 pipeline between southwestern Ontario and Montreal. That leaves just 122,000 barrels per day of refining capacity that can be served by Energy East, the report said.

“It’s very frustrating to watch a company trying to convince Canadians that they should accept these massive risks based on some perceived benefit that they may receive. When you dig into it, you find that it’s an empty promise,” said Adam Scott, with Environmental Defence.

“It’s just not true that Eastern Canada’s going to benefit in the way that TransCanada’s saying they are. And when you look and see that this is a project about putting vast quantities of oil onto tankers and shipping them out of the country, people who are convinced that ‘this is going to mean more local jobs for me’ are going to be very disappointed.” […]”<

Alberta Premier Jim Prentice says his province’s oil companies are not facing closures, even as prices approach $70 a barrel.

>””We don’t see oilsands operations shutting down,” Prentice told CTV’s Question Period in an interview that aired Sunday. “These are massive capital investments that have been built on a 50-year time horizon.”

Crude oil prices have dramatically fallen since June, when prices reached this year’s high of $107.54 USD per barrel of West Texas Intermediate crude oil. On Friday, WTI oil was about $75.70 per barrel.

The report said falling oil prices have been caused by large supply, low demand, and strong U.S. dollar. In order for the price to stabilize, “further oil price drops would likely be needed for supply to take a hit — or for demand growth to get a lift,” it said.

Analysts suggest that once prices fall below $72 a barrel, companies will begin to face serious financial consequences, and that some may be forced to close. But Prentice said Albertan oilsands companies are expected to survive the continuing drop in prices, even if they reach that $72 threshold.

“We know that if oil prices continue to fall … in the long term that’s going to be very difficult,” Sorenson told Question Period. “It’s not so much that $70 is the plateau, but if it continued to fall, we could expect that there would be job losses.”

Though Prentice was more optimistic about the “resilience” of Albertan companies, he also said falling prices are cause for concern.

“I don’t want to underestimate the importance of this. The low-price environment has a significant implication for all of us,” Prentice said.

The premier said new projects may need to be postponed, and that the Albertan government must be prepared to control spending and budgeting.

According to the Alberta government’s budget website, if oil prices drop even $1 per barrel over 12 months, it can result in more than $200 million less in revenue for the province.

But Alberta’s provincial government factors all these variables into their economic forecasts.

“People need to be aware it’s a time for fiscal prudence. It’s a time for caution,” Prentice said Sunday. “And it’s a time to control what we can control, which is our public expenditures.” “< 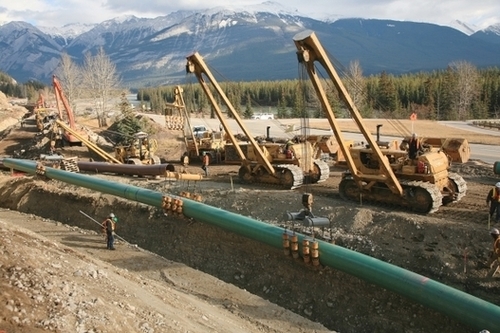