The warming effects of aircraft vapor trails could be eased with fewer night flights, especially during winter, the report says.

Sourced through Scoop.it from: news.nationalgeographic.com

Nicola Stuber, first author of the study, to be published in tomorrow’s edition of the journal Nature, suggests that contrails’ overall impact on climate change is similar in scope to that of aircrafts’ carbon dioxide (CO2) emissions over a hundred-year period.

Aircraft are believed to be responsible for 2 to 3 percent of human CO2 emissions. Like other high, thin clouds, contrails reflect sunlight back into space and cool the planet.

However, they also trap energy in Earth’s atmosphere and boost the warming effect, the study says. […]

Contrails are artificial clouds that form around the tiny aerosol particles in airplane exhaust.

They appear only in moist, very cold (less than 40ºF/4ºC) air—usually at altitudes of 5 miles (8 kilometers) or higher.

Some contrails can last for a day or longer, though they gradually disperse and begin to resemble natural clouds.

“The jury is out on the impact of contrails,” said Patrick Minnis, an atmospheric scientist at NASA’s Langley Research Center in Langley, Virginia.

David Travis, a climatologist at the University of Wisconsin-Whitewater, notes that some recent studies suggest that contrails have little impact on global climate change but have a greater regional warming impact.

“I prefer to think of contrails as a regional-scale climate problem, as they are most common in certain regions of the world, such as western Europe, eastern and central U.S., and parts of eastern Asia,” he said.

“This is due to a combination of dense air traffic in these areas and favorable atmospheric conditions to support contrail persistence once they form.”

Because of their locations and short life spans, contrails are a difficult study subject.

“The greatest impediment to understanding the contrail impacts on weather and climate is the poor state of knowledge of humidity in the upper troposphere [3.8 to 9.3 miles/6 to 15 kilometers in altitude],” NASA’s Minnis said.

“Until we can measure it properly and extensively, and model it and its interaction with cirrus clouds and contrails, we will continue to have large uncertainties about the effect of contrails.”

At the high altitudes favored by commercial airlines, the air is much more humid in winter, so contrails are twice as likely in that season, study co-author Stuber said.

“We also found that flights between December and February contribute half of the annual mean climate warming, even though they account for less than a quarter of annual air traffic,” she said of her U.K.-based research.

Study leader Piers Forster, of England’s University of Leeds, suggests that contrails’ current impact on the atmosphere is likely to increase as air traffic grows. […]”<

Air travel has come under fire for its potential contributions to climate change. Most people probably assume that its impact comes through carbon emissions, given that aircraft burn significant amounts of fossil fuel to stay aloft. But the carbon released by air travel remains a relatively minor part of the…

Sourced through Scoop.it from: www.wired.com

>” […]Others include the emissions of particulates high in the atmosphere, the production of nitrogen oxides and the direct production of clouds through contrail water vapor.

Over time, these thin lines of water evolve into “contrail cirrus” clouds that lose their linear features and become indistinguishable from the real thing.

To figure out the impact of these cirrus clouds, the authors created a module for an existing climate model (theECHAM4) that simulated the evolution of aircraft-induced cirrus clouds (they could validate some of the model’s output against satellite images of contrails).

They found hot spots of these clouds over the United States and Europe, as well as the North Atlantic travel corridor.

Smaller affects were seen in East Asia and over the northern Pacific. Over central Europe, values peaked at about 10 percent, in part because the output of the North Atlantic corridor drifted in that direction.

On their own, aircraft-generated cirrus produces a global climate forcing of about 40 milliwatts per square meter. (In contrast, the solar cycle results in changes of about a full watt/M2.)

But these clouds suppressed the formation of natural cirrus clouds, which partially offset the impact of the aircraft-generated ones, reducing the figure to about 30 mW/M2. That still leaves it among the most significant contribution to the climate produced by aircraft.

Some reports have suggested we might focus on makingengines that emit less water vapor, but the water is a necessary byproduct of burning hydrocarbon.

We’ll almost certainly be accomplishing that as a result of rising fuel prices, and will limit carbon emissions at the same time.

The nice thing is that, in contrast to the long atmospheric lifespan of CO2, if we can cause any changes in cloud formation, they’ll have an impact within a matter of days. […]”< 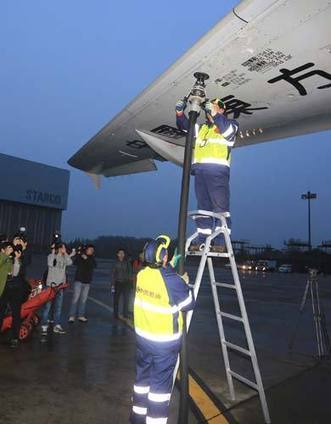 Sinopec is the first company in China to master the technology of turning palm oil and waste cooking oil into jet biofuel l.

The jet, which used a palm oil biofuel made by China Petroleum and Chemical Corp, or Sinopec, Asia’s largest oil refiner, flew for 85 minutes after taking off from Shanghai Hongqiao International Airport.

Liu said he performed several extreme maneuvers, including diving above 12,000 meters, but found no significant difference between the Sinopec biofuel and gasoline. The plane’s left fuel tank was filled with gasoline to allow him to compare.

“The performance of the biofuel during the takeoff was powerful,” the pilot added.

Sinopec is the first company in China to master the technology of turning palm oil and waste cooking oil into jet biofuel.