The near-term applications for Phononic’s science are high-end refrigeration for labs and medical facilities, as well as cooling for fiber optics and data servers that are “necessary to continue Moore’s law,” according to the company.

>” […] The 75-employee Phononic develops thermoelectrics — materials that can convert a temperature gradient to a voltage or vice versa. The technology is a brilliant pursuit, but no one has brought it to mass markets economically or at scale just yet. Traditional thermoelectrics use materials such as bismuth telluride or silicon germanium, and more recently, silicon nanowires.

CEO Anthony Atti told us this morning that the investment thesis around Phononic is that “semiconductors have revolutionized IT and LEDs, but have not had that same impact on cooling and heating.” He notes that Phononic’s thermoelectric technology is in the realm of Peltier cooling technology, but addresses three major shortcomings of that technology: efficiency, ability to scale, and ease of integration. […]

Atti claims that the compound semiconductor material used in his firm’s thermoelectrics can be manufactured using high-volume, standard semiconductor tools and equipment.

Bruce Sohn, the former president of First Solar, is on the board at Phononic. When we spoke with him this morning, he told us that he had been working with the firm for four years and believes the startup is doing something “revolutionary that can do to compressors what the [integrated circuit] did to the vacuum tube.”

Other companies developing thermoelectric technologies for cooling or capturing waste heat include the following: 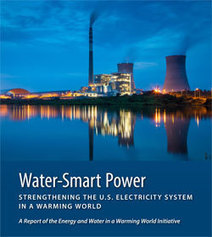 This report shows how the U.S. can build an electricity system that protects our water resources and dramatically reduces global warming emissions.

>The country stands at a critical crossroads. Many aging, water-intensive power plants are nearing the end of their lives. The choices we make to replace them will determine the water and climate implications of our electricity system for decades to come.

Today’s electricity system cannot meet our needs in a future of growing demand for power, worsening strains on water resources, and an urgent need to mitigate climate change.

Energy-water collisions are happening now, and are poised to worsen in a warming world