When we think of using electricity one of the prevalent uses is to provide a heat source.  We see this in our everyday lives as ranges and ovens, microwaves, kettles, hot water tanks, baseboard heaters, as well as other applications.  So how about reversing the process and capturing heat and directly converting to electricity, is this possible?  As it happens there is a classification of materials which have a property called a thermoelectric effect.

Boosting energy efficiency is an important element of the transition to a sustainable energy system. There are big savings to be made. For example, less than half the energy content of diesel is actually used to power a diesel truck. The rest is lost, mostly in the form of heat. Many industrial processes also deal with the problem of excessive waste heat.

That’s why many research teams are working to develop thermoelectric materials – materials that can convert waste heat into energy. But it’s no easy task. To efficiently convert heat to electricity, the materials need to be good at conducting electricity, but at the same time poor at conducting heat. For many materials, that’s a contradiction in terms.

Image 1:  The enlarged illustration (in the circle) shows a 2D electron gas on the surface of a zinc oxide semiconductor. When exposed to a temperature difference, the 2D region exhibits a significantly higher thermoelectric performance compared to that of bulk zinc oxide. The bottom figure shows that the electronic density of states distribution is quantized for 2D and continuous for 3D materials. Credit: Shimizu et al. ©2016 PNAS

The thermoelectric effect is not as efficient as converting electricity to heat, which is generally 100% efficient.  However, with waste energy streams even a small conversion rate may return a significant flow of usable electricity which would normally go up a stack or out a tailpipe.

The large amount of waste heat produced by power plants and automobile engines can be converted into electricity due to the thermoelectric effect, a physics effect that converts temperature differences into electrical energy. Now in a new study, researchers have confirmed theoretical predictions that two-dimensional (2D) materials—those that are as thin as a single nanometer—exhibit a significantly higher thermoelectric effect than three-dimensional (3D) materials, which are typically used for these applications.

The study, which is published in a recent issue of the Proceedings of the National Academy of Sciences by Sunao Shimizu et al., could provide a way to improve the recycling of waste heat into useful energy.

Previous research has predicted that 2D materials should have better thermoelectric properties than 3D materials because the electrons in 2D materials are more tightly confined in a much smaller space. This confinement effect changes the way that the electrons can arrange themselves. In 3D materials, this arrangement (called the density of states distribution) is continuous, but in 2D materials, this distribution becomes quantized—only certain values are allowed. At certain densities, the quantization means that less energy is required to move electrons around, which in turn increases the efficiency with which the material can convert heat into electrical energy. (2)

Since the 1850s scientists have known that crystalline materials are organized into 14 different basic lattice structures. However, a team of researchers from Vanderbilt University and Oak Ridge National Laboratory (ORNL) now reports that it has discovered an entirely new form of crystalline order that simultaneously exhibits both crystal and polycrystalline properties, which they describe as “interlaced crystals.”

>” […] The interlaced crystal arrangement has properties that make it ideal for thermoelectric applications that turn heat into electricity, they report. The discovery of materials with improved thermoelectric efficiency could increase the efficiency of electrical power generation, improve automobile mileage and reduce the cost of air conditioning.   “We discovered this new form while studying nano particles,” said Sokrates Pantelides, University Distinguished Professor of Physics and Engineering at Vanderbilt, who coordinated the study. “It most likely exists in thin films or bulk samples, but it has apparently gone unnoticed.”  […] 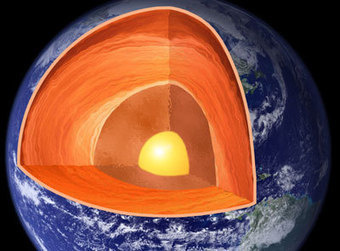