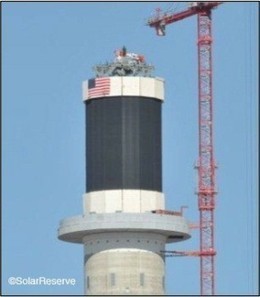 SolarReserve, a U.S. developer of large-scale solar power projects, today announced completion of the assembly of the molten salt receiver panels that sits on top of the 540 foot solar power tower for its 110 megawatt (MW) Crescent Dunes Solar…

The project will utilize technology […] to capture and store the sun’s energy in order to deliver a firm electricity supply to Nevada, day or night, without the need to burn fossil fuels. The molten salt “receiver” is actually comprised of panels formed by hundreds of special alloy tubes which will be flowing with molten salt for energy absorption and storage. Once complete, the project will be capable of storing 10 hours of full load electricity production, enough to power 75,000 homes at peak electric demand periods, even after dark.

The project closed financing and initiated construction in September of 2011 and is scheduled to complete construction and start plant commissioning at the end of 2013, including first electricity production by the end of the year. The Crescent Dunes project has secured a 25-year power purchase agreement with NV Energy to sell 100 percent of the electricity output of the facility to serve homes across Nevada.  […]

“The energy storage capability of this technology solves the problem of intermittency typical of other renewable energy sources. Additionally, because of it high efficiency, this technology can generate almost twice as much energy as a comparably sized solar facility, including facilities powered by photovoltaic panels or by a direct steam tower.” said Kevin Smith, CEO of SolarReserve.