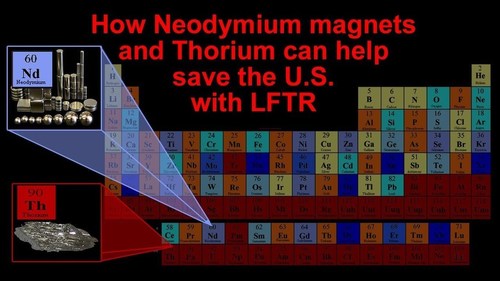 Jack Lifton’s research on mineral resources make him an important figure in projecting the future of energy. Lifton spotted the Lemhi Pass thorium reserve discoveries early on, Lifton has recently focused on world rare earth production, and as Lifton has pointed out, rare earths will play important roles in the future of energy. Lifton pointed out the importance of the rare earth element neodymium for the wind generation industry.

There’s another rare earth metal that’s critically important to our society—neodymium. In 1984, General Motors and Sumitomo developed the neodymium iron boron alloy for permanent magnets, which is the basis of all modern electric motors because it allows you to make a very small electric motor with the highest possible power density. Neodymium total world production is less than 20,000 tons. That may sound like a lot to you, but it’s tiny. And the fact is it’s recently been projected that a single wind turbine electric generator producing 1 megawatt of electricity requires one ton of neodymium.

The LFTR is a type of thorium molten salt reactor (TMSR). […]

In a LFTR, thorium and uranium-233 are dissolved in carrier salts, forming a liquid fuel. Typical operation sees the liquid fuel salt being pumped between a critical core and an external heat exchanger, where the heat is transferred to a nonradioactive secondary salt, that then transfers its heat again to a steam turbine or closed-cycle gas turbine.[2]

This technology was first investigated at the Oak Ridge National Laboratory Molten-Salt Reactor Experiment in the 1960s. It has recently been the subject of a renewed interest worldwide.[3] Japan, China, the UK, as well as private US, Czech and Australian companies have expressed intent to develop and commercialize the technology.