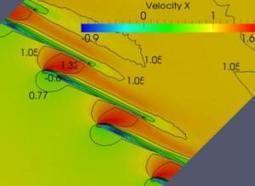 In the long sprint to find new sources of clean, low-cost power, slow and steady might win the race — the slow-moving water of currents and tides, that is.

>The system, developed by a Norwegian company called Tidal Sails AS, consists of a string of submerged blades or sails, connected via wire ropes, angled into the oncoming current. The rushing current generates large lift forces in the sails, and as they are pushed along through a continuous loop, they drive a generator to produce electricity. […]

In their analysis, the researchers found that the maximum amount of power could be generated using blades with a chord length (the width of the blade at a given distance along its length) equal to the separation between each individual blade, that are positioned at about a 79 degree angle relative to the oncoming current, and that move at a speed about one and half times faster than the current.<