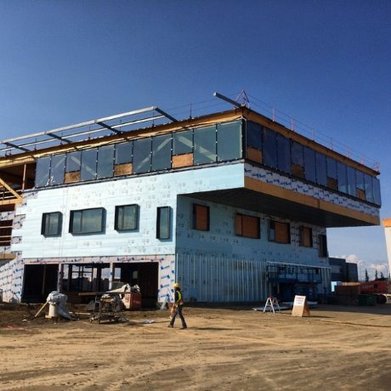 the mosaic centre for conscious community and commerce is nearly ready for occupancy, which could make it the most northerly net-zero structure on the planet.

>” […] The Edmonton centre’s designers and builders are hoping that others can learn from the project that sustainable design doesn’t have to be costly or time consuming – so much so that they have made the contract, calculations and drawings available to anyone.

The City of Edmonton said the Mosaic Centre will be the world’s most northerly commercial building to achieve net zero status, the city’s first designated LEED platinum building, the first in Alberta to be petal certified by the Living Building Challenge and Canada’s first triple bottom line commercial building.

Once completed, the new 30,000 square foot building will include  photovoltaic panels that will cover much of the roof.

It will also have LED lighting designed with a time-clock/daylight controller to meet minimum light levels and a geo-exchange system which will draw heat in winter and coolant in summer.

It was built 25 per cent ahead of schedule and five per cent under budget.

HKA architect Vedran Skopac, who worked on the project, said it was done to prove to the industry that complex, sustainable buildings can be delivered on time, on budget and without animosity between the parties.

He said the key to this all started with using Integrated Project Delivery (IPD).

The model emphasizes collaboration at an early stage and encourages all the participants to use their talents and insights throughout the different stages for best results.

“It goes all the way down to the end of the line of the tradesmen,” Skopac said.

“We invested so much in designing the process, and training and making everyone a leader.”

Skopac said a major influence on designing the actual structure was creating collision spaces, or places where building residents would be forced to meet and interact.

Skopac also wanted to influence sustainable behavior, like making windows easy to operate and open rather than using air conditioning, and making natural light penetrate deep into the building rather than encourage residents to turn on lights. […]”<