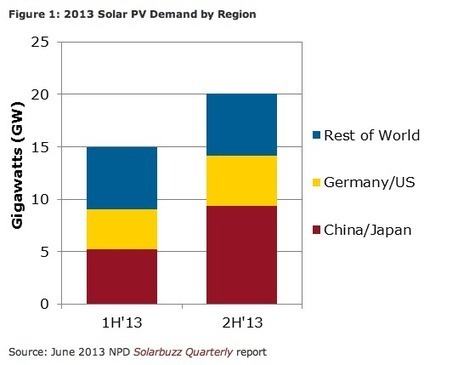 Deutsche Bank is the latest to upgrade its forecasts – for the second time in as many months – predicting that the 2014 global solar market could jump to 45 GW, after rising to 38-40 GW in 2013.

>Deutsche’s analysis is more bullish than an NPD Solarbuzz report last week that forecast solar PV demand for calendar 2013 to reach a record high of 35.1 GW, after a strong second half that would result in 20 GW being installed. In March, the research group predicted full year demand of just 31 GW.

NPD Solarbuzz analyst Michael Barker said the market was still in transition (from older markets such as Europe to newer ones in Asia), and would continue to rely on four key countries for the bulk of demand – Germany, China, Japan, and the US – which accounted for more than 60% of demand in the first half.

It said China and Japan alone would account for 45% of global demand in the second half, up from just 10% three years ago.<