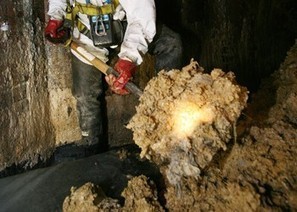 Waste fat and oil from restaurants and clogged up drains underground (pictured) will soon power the UK’s largest sewage works. A new power station at Beckton in East London opening …

Thames Water says it has agreed to buy 75 GWh of this output to run its Beckton sewage works, which serves roughly 3.5 million people, as well as a nearby desalination plant […]

The water firm has committed to provide the power station with 30 tonnes a day of fat, oil and grease (FOG) enough to fill a six metre-long shipping container. That’s at least half of the fuel the generator needs to run.