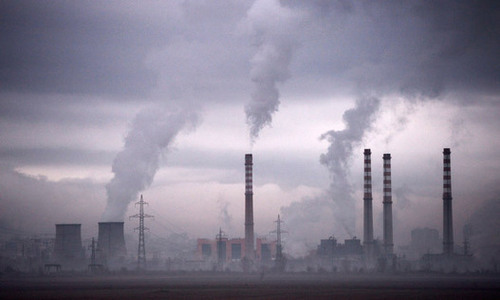 >The scientists’ warning – the most comprehensive and convincing yet produced by climate scientists – comes at a time when growing numbers of people are doubting the reality of global warming. Last week, the UK Energy Research Centre (UKERC) published a survey showing that the proportion of British people who do not think the world’s climate is changing has almost quadrupled since 2005.

Asked if they thought Earth’s climate was changing, 5% of respondents said “no” in 2005, a figure that rose to 11% last year and reached 19% this year.

But as the IPCC report underlines, scientists are becoming more and more certain that climate change poses a real danger to the planet.

Many believe the disconnection between popular belief and scientific analysis has been engineered by “deniers” explicitly opposed to the lifestyle changes – including restrictions on fossil fuel burning – that might be introduced in the near future.

“There are attempts by some politicians and lobbyists to confuse and mislead the public about the scientific evidence that human activities are driving climate change and creating huge risks,” said Stern.

“But the public should be wary of those who claim they know for certain that unmanaged climate change would not be dangerous. For they are not only denying 200 years of strong scientific evidence – the overwhelming view of the world’s scientific academies and over 95% of scientific papers on the subject – but they are often harbouring vested interests or rigid ideologies as well.”

The report will be discussed this week by political leaders meeting in Stockholm. The study – the work of more than 200 scientists – outlines the physical changes that are likely to affect Earth’s climate this century.<