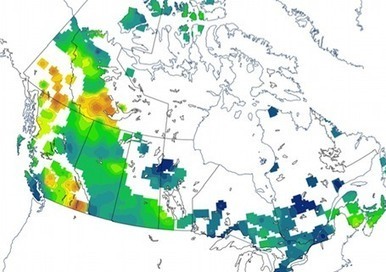 “Canada’s in-place geothermal power exceeds one million times Canada’s current electrical consumption,” the report notes, though also stating most of that available power could not actually be produced. “Environmental impacts of geothermal development are relatively minor compared to other energy developments, however there are still key issues to be addressed….Geothermal installations have the potential to displace other more costly and environmentally damaging technologies.”

There is at least 5000 megawatts of available geothermal power in various parts of British Columbia, Alberta, and the Yukon. What’s more, the report’s authors write, the cost of delivering geothermal power is expected to rival the costs of coal within 15 years or so. The limitations of developing the huge geothermal resource have a lot to do with location: Some of the most promising areas are far away from load centers, and the costs of developing huge transmission corridors to bring the power to where it is needed would make such projects unfeasible. Still, there is enough located in accessible areas to make a big difference.