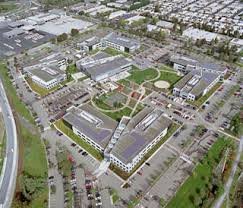 “My initial expectation was that we would see the return on investment in terms of driving down our energy costs, and we have seen that,” says Pittenger, to whom Smith reports. “What wasn’t part of my expectations was the gains we would have in operational efficiencies and our abilities to do repairs and maintenance much, much better and much, much smarter.”

>” […] Over those 125 buildings on the main Microsoft campus, there are more than 30,000 building systems components — assets, in Smith’s terms — and more than 2 million points where building systems ranging from HVAC to lighting to power monitoring are connected to sensors. In a 24-hour period, those systems produce half a billion data transactions. Each one is small, but when you’re talking about half a billion of something, all those 1s and 0s add up pretty quickly.

But what’s important is being able to do something with those 1s and 0s, which Microsoft could not do until recently because of the mess of systems involved, says Jim Sinopoli, managing principal, Smart Buildings, who helped set up the software pilot program.

“You have an opportunity, if you’re building a new campus or a new building, to really start with a clean slate,” he says. “But you go in these existing buildings and you generally will come upon some unforeseen obstacles.”

The project turned out to be a relatively easy sell. First, Pittenger’s background is financial, so being able to show a strong ROI was a definite plus for Smith, because his boss understands exactly what that means when it comes time to ask for funding. Second, facilities management at Microsoft benefits from a company culture that considers every department to be a key player.

“(CEO) Steve Ballmer likes to say, ‘There are no support organizations at Microsoft,'” Pittenger says. “Everybody is fundamental to the core mission of the company. And we feel that way.”

After gaining approval, the first step was deciding how those obstacles would be overcome. Smith and his team began by writing out 195 requirements for the new way of operating and what their ultimate tool would be able to do. Then they proceeded to look around for an off-the-shelf solution that would be able to do all those things — and failed to find one. So, they built it.

More specifically, they worked with three vendors in a pilot program, encompassing 2.6 million square feet, to build an “analytics blanket” of fault detection algorithms that is layered on top of the different building management systems and reports back to the operations center. If Building 17 and Building 33 have different building management systems, those systems may not be able to talk to each other or provide data to a single reporting system in the operations center. But they can talk to the analytics blanket, which can take the information from every building and combine it into a single output in the operations center. It’s not a replacement for the BMS; instead, it’s adding on functionality that enhances the benefits of the existing BMS.”<