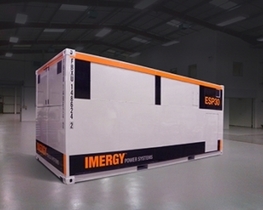 The company claims LCOE [Levelized Cost of Energy] is less than half the cost of any other battery technology available.

The ESP250 has an output power capability of 250 kilowatts and 1 megawatt of energy storage capacity. It’s suited for both short- and long-duration storage, with available energy ranging from two to 12 hours of output duration. The 40-foot batteries (each about the size of two shipping containers) are designed to be deployed individually or linked together for larger-scale projects. […]

Where Imergy has been able to edge out its competitors is on material cost. Vanadium is abundant but expensive to extract from the ground. Imergy has developed a unique chemistry that allows it to use cheaper, recycled resources of vanadium from mining slag, fly ash and other environmental waste.

With this chemistry, the levelized cost of energy for Imergy’s batteries is less than half of any other battery on the market right now, according to Hennessy. Vanadium flow batteries are orders of magnitude cheaper than lithium-ion batteries on a lifetime basis because they can be 100 percent cycled an unlimited number of times, whereas lithium-ion batteries wear down with use, according to the firm. Despite the compelling cost claims from Imergy, lithium-ion has been the predominant energy storage technology being deployed at this early point of the market. And very few flow batteries are currently providing grid services.

Imergy’s capital costs are lower than every other battery technology except lead-acid, Hennessy added. But he believes the company can hit that mark (roughly $200 per kilowatt-hour) by the end of the year by outsourcing contracts to manufacturing powerhouse Foxconn Technology Group in China. Delivery of the ESP250 is targeted for summer of 2015.

At this price, Imergy says the ESP250 offers an affordable alternative to peaker plants and can help utilities avoid investing more capital in the grid. Some might disagree with the claim that grid-scale storage can compete with fast-start turbines and natural gas prices below $3 per million Btu. But according to Hennessy, it all comes down to the application. Batteries can’t compete with gas at the 50-megawatt scale, but they can compete with gas at the distribution level.

“Batteries that are distributed have a huge advantage over gas, because when you buy gas down at the low end, you’re paying a lot more than $3 to $4 per MMBtu, because you’ve got to pay for all the transmission down to the small end,” he said.

Demand for cost-effective energy storage is growing as intermittent renewables become cheaper and come on-line in higher volumes. GTM Research anticipates the solar-plus-storage market to grow from $42 million in 2014 to more than $1 billion by 2018.

Imergy sees a ripe market in the Caribbean, parts of Africa and India, Hawaii and other places where the LCOE for solar-plus-storage is already competitive. As costs continue to fall, New York, California and Texas will also become attractive markets.”<