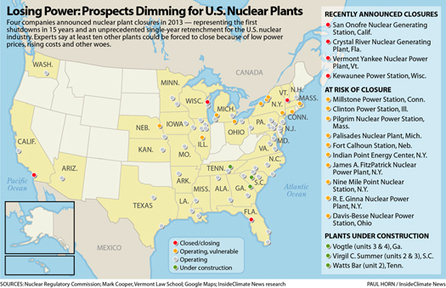 A string of plant closures, project cancellations and other setbacks has raised new doubts about the future of nuclear power in the United States, but there’s disagreement about whether the retrenchment will be limited and temporary or the…

>The blows to nuclear power’s prospects have come on many fronts, but it was the surprising spurt of plant closures that laid bare the industry’s worsening plight. The plant shutdowns are the first to hit the U.S. nuclear power market in 15 years, and the retirements don’t bode well for many of the nation’s 99 remaining power reactors.

Analysts say economic woes make at least 10 other plants vulnerable enough to follow suit. Almost all of those are among the nation’s 47 “merchant” nuclear plants, which, unlike regulated plants, operate in open markets and have to beat out other power suppliers to win customers and long-term supply contracts. The especially vulnerable facilities cited by analysts are at greater risk for closure because their power is too expensive to sell profitably in wholesale markets or because their output is too small or too unreliable to support rising operating and retrofit costs.<