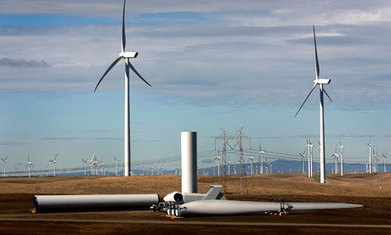 A relative slowdown in new wind turbine construction in China was offset by increases in the US, Germany, India and the UK

“While China paused for breath, both the US and European markets had exceptionally strong years,” said Steve Sawyer, secretary general of the Global Wind Energy Council (GWEC), which produced the statistics. “Asia still led global markets, but with North America a close second, and Europe not far behind.”

The UK now ranks sixth in the world for installed wind power, with 8.5GW. In Europe, only Germany (31GW) and Spain (23GW) have more. China leads the world with 77GW installed and the US is second with 60GW. […]

The record year for installation in the US was driven by a rush to beat an anticipated end to tax credits: 8GW of the total 13GW were installed in the last quarter of 2012. However, the tax credit has since been extended, meaning a dramatic slowdown in the US in 2013 is less likely. […]