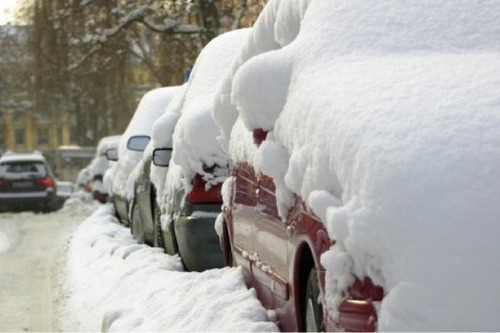 If there’s one thing Canadians know how to do, it’s drive in the winter. But did you know it’s a sci…

>"Expect to use more fuel in the winter. The U.S. Environmental Protection Agency found that a drop in temperature from 24°C to 7°C increased fuel consumption in urban commutes by 12 to 28 percent for eight different vehicles tested. For a vehicle that typically achieves a 500 km range on a full tank of fuel, this represents a loss of 60 to 140 km per fill-up during the winter months.

• Winter roads create difficult driving conditions. With increased asphalt deterioration and a mix of snow, ice, slush, water, salt, gravel and sand, Canadian roads can be pretty awful in winter and harder to manage. Your vehicle’s engine works harder to offset the increased rolling resistance, as your tires have to work to push aside heavy snow and road cover. The snow and ice also increase wheel slippage, which results in higher fuel consumption.

• Winter gas normally has lower energy density. Gasoline composition is seasonally and geographically adjusted based on historical temperature data. A litre of winter gas has less energy content than a litre of summer gas, typically in the range of 1.5 to three percent.