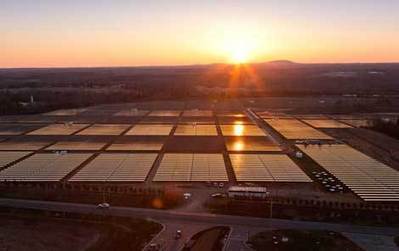 Apple said Thursday that it has achieved 100 percent renewable energy at all of its data centers, including facilities in North Carolina, Oregon, California and Nevada.

The road to renewable was a formidable one. Apple doubled the size of an already huge solar array in North Carolina, buying another 100 acres of land to support the expansion.  The two separate 100-acre solar arrays in Maiden, N.C. each produce 42 million kilowatt-hours (kWh) of energy annually. Apple also uses biogas from nearby landfills to power Bloom Energy Server fuel cells at its Maiden site.

Although it’s been secretive about the project, the company has been vocal in its plans to use renewable power exclusively for its new data center in Prineville, Oregon. That energy will come from a mix of sources, such as wind, hydro, solar and geothermal power.