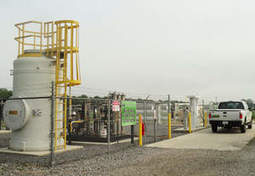 MADISON, WI–(Marketwired – Mar 3, 2015) – BioCNG, LLC announced that the St. Landry Parish Solid Waste Disposal District’s BioCNG Vehicle Fuel Project, which was fully commissioned in 2012, will be expanded to include an additional BioCNG system and a remote CNG fueling station. BioCNG, which partnered with the District…

The expansion is part of a contract between St. Landry Solid Waste and Progressive Waste Systems. In exchange for continuation of its existing waste hauling contract with the District, Progressive Waste has agreed to purchase new CNG-powered trucks, and will have access to the increased BioCNG generated from the expanded system. The expanded project will also provide BioCNG fuel to additional St. Landry Parish clients.

St. Landry Parish Solid Waste Disposal District executive director Katry Martin, said, “The fact that the hauler that delivers waste to the Parish landfill will fuel its trucks with the biogas generated from the landfill is a true example of the power of renewable energy sources and a preview of the future of biogas.”