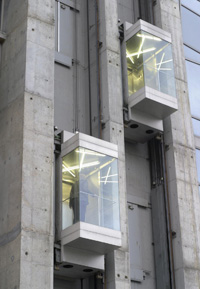 Elevators and escalators make up 2 to 5 percent of the energy used in most buildings, but can reach as high as 50 percent during peak operational times. At 5 percent, that means the yearly energy consumption of U.S. elevators is approximately five times of that used in all of Washington D.C.

>”Chicago—More energy-efficient elevators can significantly reduce the costs of operating a building, but the information needed to help building owners identify the appropriate elevator system—and the savings associated with it—aren’t readily available, according to a new study published by a leading policy group. The study, by the American Council for an Energy-Efficient Economy, was published with the support of UTC Building & Industrial Systems, the parent organization of Otis, the world’s largest manufacturer and maintainer of people-moving products.

[…] The technology exists today to reduce that consumption by 40 percent or more, especially by cutting energy use between trips, when an elevator is idle, according to the study. Some technologies have been found to reduce consumption by as much as 75 percent, but without a standard way to measure energy savings and a rating system to distinguish more efficient elevators, building owners may be unaware of the benefits of upgrading to a more efficient system or choosing a more efficient system for new construction.

The study lays out a framework for industry leaders to set common standards for measuring elevator efficiency. Those standards could lead to a rating system, such as the U.S. Environmental Protection Agency’s ENERGY STAR® ratings already in place for heating, ventilating and air-conditioning systems, and many home appliances. Clear standards also could lead energy utilities and government agencies to offer incentives, such as rebates, for very efficient models. And building label programs, such as the U.S. Green Building Council’s LEED® program, could include elevator efficiency as a factor in certifying buildings. Right now, the LEED program considers elevators a part of unregulated “process loads,” and there are no direct credits for installing more efficient systems.

“Owners see elevators as an extension of the building lobby — a way to include their personality and values in the building,” said John Mandyck, chief sustainability officer, UTC Building & Industrial Systems. “As consumers and tenants better understand and value the effects green buildings have on the health and productivity of inhabitants, clear standards for measuring elevator efficiency can provide a great opportunity to reduce operating costs and showcase the environmental attributes of a building.”

The report identified energy-efficient elevator technologies that can be included in building codes and factored in elevator rating and labeling systems. […]”<