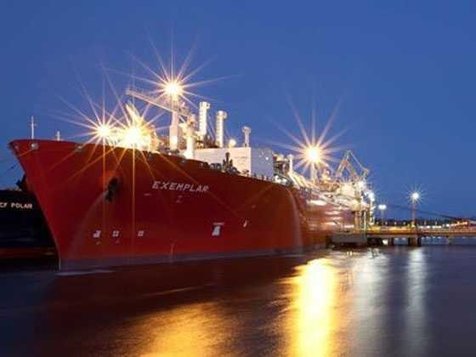 The floating 8 million tonne per annum (mtpa) export plant moored at Lavaca Bay, Texas advanced by Houston-based Excelerate has been put on hold, according to regulatory filings obtained by Reuters.

Excelerate’s move bodes ill for thirteen other U.S. LNG projects, which have also not signed up enough international buyers, to reach a final investment decision (FID). Only Cheniere’s Sabine Pass and Sempra’s Cameron LNG projects have hit that milestone.

Back when LNG and crude oil prices were riding high in February, Excelerate, founded by Oklahoma billionaire George Kaiser, applied for permits to build the facility.

Eleven months on, its submission to the U.S. Federal Energy Regulatory Commission on Dec. 23 said that uncertainty generated by a steep decrease in oil prices has forced it to conduct a “strategic reconsideration of the economic value of the project” and to suspend all activities until April 1, 2015.

“Due to the recent global market conditions, the company has determined that, at this time, this project no longer meets the financial criteria necessary in order for us to move forward with the capital investment,” a company spokesman told Reuters.

Prices that LNG projects can charge for long-term supply are falling from historic highs as new producers crowd the market, which is already oversupplied due to slowing demand and rising output that has seen spot Asian LNG prices halve this year.

At the same time, major consumers from Japan to South Korea and China are seeking to offload some of their long-term LNG supply commitments, contributing to the glut. […]”<