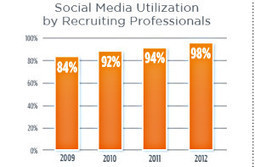 Career Management – Among recruiting and staffing professionals, increased access to passive job candidates via social media presents the biggest opportunity for recruiting in 2013, according to a survey from Bullhorn.