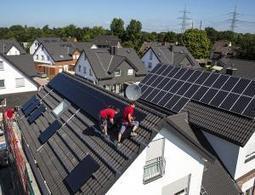 A new cryptocurrency with a solar-powered twist could be just the incentive we need to make the shift to clean energy.

>SolarCoin chose solar rather than another renewable technology because investment in solar panels is easier than in wind turbines, for example. "Solar is interesting because it can be very grassroots," says Gogerty. He and a colleague first conceived of an energy-backed asset in 2011 but couldn’t make the idea work without a central bank. Bitcoin makes the bank unnecessary. "We’re very thankful for Bitcoin leading the change."

Bitcoin has been accused of wasting energy in the past because of the computing power it takes to mine coins, but Gogerty says that SolarCoin is 50 times more energy-efficient because its algorithm allows the total number of coins to be mined faster – and that’s before factoring in the energy boost from new solar panels.

If SolarCoin succeeds, the model could even be applied to other environmental projects, such as conserving the rainforest or endangered species. "If someone can come up with the mechanism and the approach, it would be a great thing," says Gogerty.<