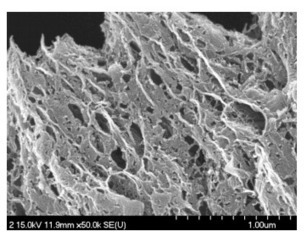 Conventional batteries take so long to charge that they cannot efficiently store braking energy. Graphene supercapacitors store almost as much but charge in just 16 seconds.

>Now Santhakumar Kannappan at the Gwangju Institute of Science and Technology in Korea and a few pals say they have a solution based on the wonder material of the moment–graphene. These guys have built high-performance supercapacitors out of graphene that store almost as much energy as a lithium-ion battery. They can charge and discharge in seconds and maintain all this over many tens of thousands of charging cycles.

The trick these guys have perfected is to make a highly porous form of graphene that has a huge internal surface area. They create this graphene by reducing graphene oxide particles with hydrazine in water agitated with ultrasound.

The graphene powder is then packed into a coin-shaped cell, and dried at 140 °C and at a pressure of 300/kg/cm for five hours.

The resulting graphene electrode is highly porous. A single gram of this stuff has a surface area bigger than a basketball court. That’s important because it allows the electrode to accomodate much more electrolyte (an ionic liquid called EBIMF 1 M). And this ultimately determines the amount of charge the supercapacitor can hold.

Kannappan and co have measured the performance of their supercapacitor and are clearly impressed with the results. They say it has a specific capacitance of over 150 Farrads per gram can store energy at a density of more than 64 watt-hours per kilogram at a current density of 5 amps per gram.

That’s almost comparable with lithium-ion batteries, which have an energy density of between 100 and 200 watt-hours per kilogram.

These supercapacitors have other advantages too. Kannappan and co say they can fully charge them in just 16 seconds and have repeated this some 10,000 times without a significant reduction in capacitance. “These values are the highest so far reported in the literature,” they say.<