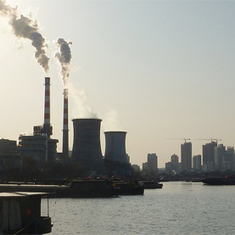 >Currently, more than half of China’s industrial water usage is in coal-related sectors, including mining, preparation, power generation, coke production and coal-to-chemical factories, according to China Water Risk, a nonprofit initiative based in Hong Kong. That means that the water demand of the Chinese coal industry surpasses that of all other industries combined.

To answer China’s rising appetite for power, Chinese policymakers have decided to establish 16 large-scale coal industrial hubs by 2015. If the plan materializes, those hubs are estimated to consume nearly 10 billion cubic meters of water annually, equivalent to more than one-quarter of the water the Yellow River supplies in a normal year, according to a report jointly issued last year by the environmental group Greenpeace and the Chinese Academy of Sciences.<

1 thought on “Does China Have Enough Water to Burn Coal?: Scientific American”