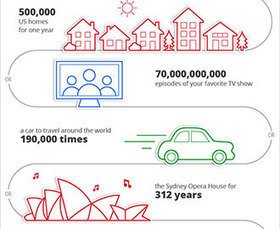 With a new wind investment, the company has enabled two gigawatts of clean power to come online.

“… I’ll add a couple more numbers: until 1999, the U.S. had less than 2 gigawatts of wind and solar total. That’s the good number. The bad number is that American generating capacity stands at roughly 1,054 gigawatts, so two GW is a rounding error at the national level. (The boring lesson? Transforming an energy system is hard, and it takes a lot of money, time, and effort.)”

Wind power is only a part of the total answer to power the grid. Sometimes the wind does not blow or is not near populations and as such is not considered a capable primary energy source. Often wind power (and solar) must be coupled with a properly sized storage system and/or supplementary sources (emergency fuel-fired generator or with other co-generation projects, as examples). – DT