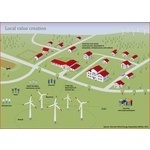 Yesterday, German energy cooperatives met for the first time to coordinate their interests in the country’s energy transition. The meeting was the brainchild of conservative CSU politician Josef Göppel.

Perhaps the biggest difference between the way Germany is switching to renewables and the way many other countries are doing so (China, the US, the UK, France, etc.) is the focus on citizen involvement. Not only does the German solar market consists of a large number of small roof arrays, but the biogas market also consists of a large number of relatively small facilities on individual farms, and small investors are even the driving force behind large wind turbines in “energy cooperatives.”

Yesterday, German energy cooperatives met in Berlin to establish a network that will give these groups a coordinated voice in the energy transition. As the organizers explain in their press release, more than 80,000 German citizens have come together in some 600 energy cooperatives.

All parties support the energy transition in Germany, though they disagree on details. But there is no left-wing/right-wing divide for and against renewables in Germany. The meeting yesterday is a good example; conservative CSU politician Josef Göppel originally proposed to bring that Germany’s energy cooperatives together.